1917
Sergeant T Caldwell of the 12th Battalion, The Royal Scots Fusiliers, and Corporal David T Hunter of the 1/5th Battalion, The Highland Light Infantry were both awarded Victoria Crosses for conspicuous bravery at the Battle of Passchendaele in1917.

It is interesting that forty-two years after these brave acts, the two regiments would amalgamate to form The Royal Highland Fusiliers.

This was one of the bloodiest battles of WWI.

“For most conspicuous bravery and initiative in attacking near Audenarde 1918, when in command of a Lewis gun section engaged in clearing a farmhouse. When his section came under intense fire at close range from another farm, Sergeant Caldwell rushed forward towards the farm, and, in spite of very heavy fire, reached the enemy position which he captured single-handed, together with 18 prisoners. This gallant and determined exploit removed a serious obstacle from the line of advance, saved many casualties, and led to the capture by his section of about 70 prisoners, 8 machine guns and a trench mortar.”

“For most conspicuous bravery and devotion to duty. Corporal Hunter was detailed to take on an advanced post close to the enemy who drove back the posts on Corporal hunter’s flanks and established posts in close proximity to, and around him, thus completely isolating his command. Nevertheless he maintained his position and repelled frequent attacks, until the evening of the third day, when a counter-attack relieved them. Without food and water he had held on to his post for over 48 hours. The outstanding bravery , coupled with the determination, fortitude and endurance displayed by Corporal Hunter is beyond all praise and is a magnificent example to all.” 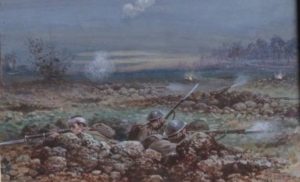